I like to play with words and words into verses and verses into poems. Who doesn’t? Sometimes a poem is important and moves the moral narrative forward to a better place. These are the poems I love to read and find. But sometimes I like to write poems just for kicks. So here is a poem that is not an important poem, nor a particularly good poem. But I hope it makes you smile. This poem is dedicated to my friend, or to you,  on a day whose ‘wasband’ gave her an unacceptable word assault. (You know who you are).

His words spewed from his mouth

She could see them hitting his carpet

she did the only sensible

she collapsed his mandibles

then squeezed his eyeballs into one

turned to a marbled ball of blood

and skin    she crawled onto those spaces

his molecules and atoms next

collapsed with no space

smaller than a mote of dust

began to clean HER  house

but she could not see him

so she hoovered him by accident

his ugly words no longer 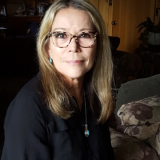 Amelia Díaz Ettinger was born in Mexico but was raised with her paternal family in Puerto Rico, where she grew up as a single child in a large, male-dominated, family. At nineteen she ran away to Washington State, to pursue a Master’s of Science in Biology and to liberate herself from the hermetic hold the island, and her family had on her. Currently, she is finishing her first year in Eastern’s MFA program in creative writing. Her poetry and short stories have appeared in journals and anthologies. Her first collection of poetry was published in 2015 by RedBat Press, Speaking at a Time. Learning to Love a Western Sky will be available this fall from Airlie Press, and Fossils on a Red Flag will be available from Finishing Line Press next year.